The BEST Running Playlist for Floridians Florida has always had active running communities and a rocking music scene. It’s time for both worlds to meet here in “The BEST Florida Running Playlist!” 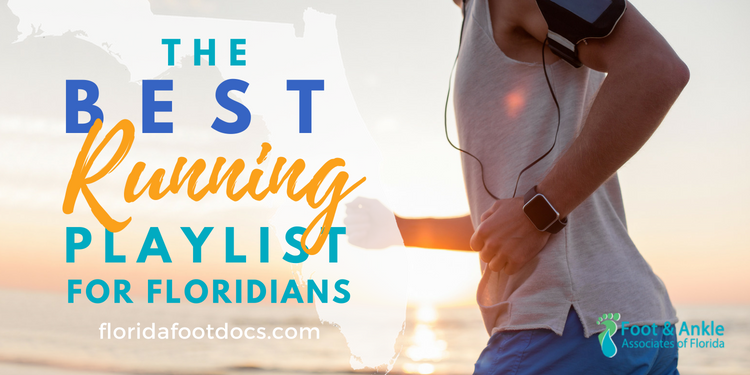 Before we jump into the tracks you need to include in your playlist, it needs to be noted that the chosen artists are connected to Florida in some way. For example, the Allman brothers (Duane and Gregg) were born in Nashville, but their band was formed in Jacksonville. Conversely, Jim Morrison was born in our great state (in Melbourne, specifically), but The Doors was actually formed in Los Angeles.

One more note and then we’ll get started – hang around after this playlist for some thoughts on why running is such a great exercise, how to stay safe when you run, and foot and ankle conditions you should know.

Without further ado, we humbly present our selections!

“Runnin’ Down a Dream” – Tom Petty (1989). Co-written by Petty, Mike Campbell, and Jeff Lynne this classic track tends to be a bit underrated, but it combines a fantastic beat with Petty’s laidback style for something that can be described as “the best of both worlds.” The song is more about driving in a car, but “I felt so good/like anything was possible” captures a feeling many runners can relate to experiencing when they’re in a running groove.

Bonus Tom Petty (with or without The Heartbreakers) songs to include in your playlist – “I Won’t Back Down” (not when you’re running!), “Learning to Fly,” “Don’t Come Around Here No More,” “Into the Great Wide Open” (a great choice when you consider running is an activity you can do pretty much wherever you want), and “Free Fallin’.”

“Simple Man” – Lynyrd Skynyrd (1973). This Skynyrd track was included in a soundtrack that is a favorite of many classic rock fans across the country – Almost Famous. Writer/Director Cameron Crowe had his own reasons for including the song in the movie’s soundtrack. Our reason for including the song in our list has to do with the fact that running is a very simple form of exercise. You don’t need any fancy equipment or have to perform complicated movements. Just make sure you have an appropriate pair of running shoes, lace them up tight, and then go. Simple.

Bonus Lynyrd Skynyrd songs to include in your playlist – “Gimme Three Steps” (even though you’ll likely be taking much more than three steps!), “Tuesday’s Gone,” and, of course, “Free Bird” (since covering miles while running can be a simply liberating feeling).

“3 A.M.” – Matchbox Twenty (1996). Runners are known for getting up early for their workouts, but 3 A.M. is a bit excessive. Of course, the Orlando band’s hit single wasn’t actually about running—which is something you will find to be a common theme in this playlist—but it’s still a catchy track that will keep you moving along…no matter the time of day!

Bonus Matchbox Twenty songs to include in your playlist – “Unwell” (which is how you’ll feel if you don’t exercise on a regular basis), “Push,” “If You’re Gone,” and “Long Day” (a perfect track for when you’re heading out to relieve some stress after a, well, long day).

“Ramblin’ Man” – The Allman Brothers Band (1973). A “ramblin’ man” is considered to be someone who travels the country at his leisure. Depending on your experience, running ability, and goals, your training could be either more or less leisurely than it is for others. No matter if you’re a running pro or are just starting out, putting a little Allman Brothers in your playlist is always a great idea.

Bonus The Allman Brothers Band songs to include in your playlist – “Jessica,” “Melissa,” and “No One to Run With” something that is definitely not an issue if you join one of our local running clubs!).

“Riders on the Storm” – The Doors (1971). This particular track from the classic rock band isn’t quite as frantic or upbeat as some of their other offerings, but it has a rhythmic quality that runners tend to appreciate. For those who are interested in pop culture history, it’s interesting to note that this was the final studio-recorded song by lead singer Jim Morrison before his passing away.

Bonus The Doors songs to include in your playlist – “Light My Fire” (too controversial for the Ed Sullivan Show, but very tame by today’s standards), “Hello, I Love You” (since runners can be quite passionate about their favorite activity), and “Break on Through (To the Other Side).”

The previous section featured some absolute heavyweights, and particularly from the “rock” side of things. Now we’re going to include songs from artists who are longshots to ever be voted into The Rock and Roll Hall of Fame and others who are (or were) quite popular for other types of music, such as:

“I’ll Be Running” – Molly Hatchet (1978). As with the case for 38 Special, you might prefer some of the band’s other tracks, including “Flirtin’ with Disaster” (their most well-known song) or “Dreams I’ll Never See” (which has some outstanding guitar solos).

“Low” – Flo Rida (featuring T-Pain) (2008). For the hip-hop and rap aficionados, you can get not one, but two different Florida-connected artists on this track. Flo Rida hails from Carol City and T-Pain was born in Tallahassee. (Even if hip-hop’s not your cup of tea, you have to admit that it would haven been difficult for us to leave an artist who goes by the Flo Rida moniker off this particular Florida-based running list!)

“We Are One (Ole Ola)” – Pitbull (featuring Jennifer Lopez and Claudia Leitte) (2014). Another one for hip-hop fans, this particular track by the Miami-born artist Pitbull was actually the official song of the 2014 FIFA World Cup.

“C’mon N’ Ride It (The Train)” – Quad City DJs (1996). If you like dance music—including songs that were quite popular for clubs and DJs back in the mid-to-late nineties—this is a “must” for your running playlist.

“Over Your Shoulder” – Seven Mary Three (1998). The Orlando-based band’s 1996 song “Cumbersome” is what they are better known for, but this song is a great one for running because of its focus on moving forward and leaving the past “over your shoulder.”

“Bye, Bye, Bye” – ‘N Sync (2000). The biggest “boy bands” of the late 90’s and early 00’s were formed in Orlando, which probably isn’t news to you if you’ve been living here for a while. ‘N Sync is obviously one of the two biggest ones from the era, but don’t forget to include this smash single in your running playlist!

“I Want It That Way” – Backstreet Boys (1999). Naturally, the other big boy band was the Backstreet Boys, and this single from their third studio album, Millennium – which was the best-selling album of 1999 (in the U.S.).

Those are some great tunes for running, but why would anyone even want to run? Well, there are several reasons: 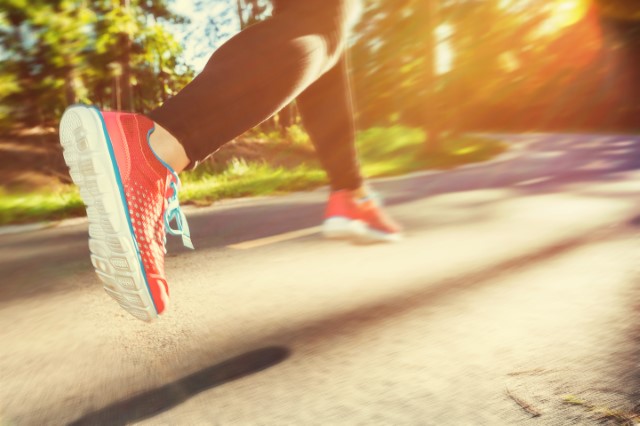 When you participate in this particular exercise, there is a certain degree of injury risk – which is something that can be said for essentially any type of physical activity.

Feet and ankles have an especially higher risk of injury than do other areas of your body, and this probably makes a lot of sense to you.

Some of the more common potential foot and ankle running injuries are things like: 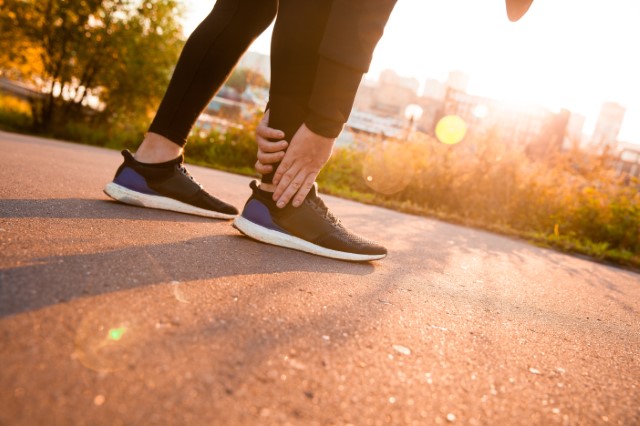 Even though there is always going to be at least some risk of injury—and this holds true for virtually any time your body is in motion—there are measures you can take to lower it, such as:

We hope you are able to stay safe while running. If you do sustain any foot or ankle injury or condition—no matter if it’s from running or otherwise—have our team of podiatric specialists perform a professional diagnosis and then create a treatment plan to resolve it for you.

Remember, foot pain isn’t going to just go away if you stick with your normal routine and do not take measures to address it. More than that, the problem can become worse. Don’t let that happen to you!

Instead, contact our staff at Foot & Ankle Associates of Florida today by calling 407-339-7759 or 352-589-9550 (if calling from Lake County) or requesting an appointment online right now.
Be the first to comment!
Post a Comment

We are open and seeing patients in need. Please read our COVID-19 update for details.